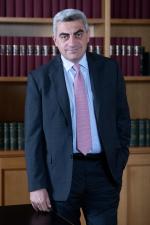 He joined the firm in 1992 and became partner in 2001. Renato has developed broad experience in merger and acquisition, cross border transactions, private equity and venture capital sector.

He set up and managed the opening of the Bologna Office in 2002 and later the firm’s Abu Dhabi Office in 2010.

Renato is Co-Head of Private Equity, Head of Venture Capital and Middle East Coordinator of our firm.

He is a member of the Italian Bar. He speaks Italian, English and French.