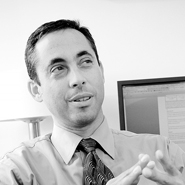 Jim practices at the intersection of law and politics. Based on decades of experience as a regulatory lawyer, mediator, and elected official — including as Mayor of Portland, Jim helps clients in heavily regulated industries achieve their legal and policy goals before state and local regulatory agencies and legislative bodies.

Jim's unique background allows him to provide clients not only with insightful legal advice, but also with creative solutions involving public relations, facilitation, and outreach to key government, business, and community leaders. His experience in public service and leadership positions on multiple business and nonprofit boards gives him a deep understanding of government and a broad range of connections within Maine's business and political community.

Applying these skills across a wide range of regulated industries, Jim has helped craft or modify laws and regulations, represented clients in adjudicatory proceedings before government agencies and the courts, assisted clients in complex business transactions, facilitated stakeholder groups, and provided a wide range of legal and public policy advice.

In addition to Jim's main services and industries, he also focuses on the following unique areas:

Energy Law Update is a source of news and analysis relevant to the world of energy law: major court and regulatory orders, event announcements, breaking news in the world of renewable energy, and novel legal issues. The blog is edited by Katie Gray and Nora Healy, and features contributions from...

Law of the Land (and air and water)
Verrill

If the legal issue involves land, air, water, waste, wind, wildlife, trees, or anything else in the natural world, the attorneys in Verrill Danaâ€™s Environmental Law Group have it covered. Seasoned by decades of experience, our legal team recognizes that one of the few constants in our field is...

The attorneys of Verrill Danaâ€™s Breweries, Distilleries & Wineries Group are here to help your business navigate the complex world of craft beverage production. Our attorneys have the experience necessary to tackle the legal issues and allow you and your company to focus on doing what it does best,...