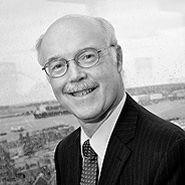 Jim has practiced commercial real estate law for more than 30 years. Over that time, he has represented lenders in commercial lending, handled a variety of lease negotiations, and represented developers of office buildings, hotels, and other commercial projects.

Jim has experience with loan restructuring transactions, secured and unsecured lines of credit, and term loans to REITs and other large real estate companies.

Over the past decade, Jim has represented lenders and developers including a developer of large retail projects. Jim has worked on transactions relating to Massachusetts real estate and large tracts of Maine timberlands, as well as energy-related transactions including purchases and sales of hydroelectric facilities and financing and leases for wind power projects.

Jim and his family are enthusiastic sailors. For years, they have cruised on their boat Morning Star along the coast of Maine. Jim's wife, Leigh, was the first female commodore of the Portland Yacht Club, where their three children learned to race small sailboats.

The attorneys of Verrill Dana’s Breweries, Distilleries & Wineries Group are here to help your business navigate the complex world of craft beverage production. Our attorneys have the experience necessary to tackle the legal issues and allow you and your company to focus on doing what it does best,...