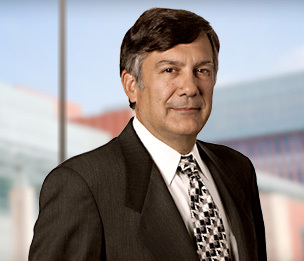 John M. Thomas is a member of Dykema’s Automotive and Products Liability Practice Group and leader of the Firm’s Class Actions Practice. Recognized nationally as a sophisticated class action and appellate practitioner, he has briefed and argued appeals in courts throughout the country including the Supreme Courts of Michigan and Virginia. According to Chambers USA 2021, clients describe Mr. Thomas as “very capable in the consumer class actions space, –  a longtime practitioner in the realm who gets very good results in auto matters."

Mr. Thomas’ experience in the automotive industry is extensive. For 27 years, he worked in Ford Motor Company's Office of the General Counsel where he supervised much of Ford's most significant appellate, class action and other complex litigation. He developed Ford’s acclaimed Advanced Motions program, designed to influence the long-term development of the common law, particularly product liability law, by integrating legal scholarship and appellate practice with successful trial strategy. The program was instrumental in Corporate Counsel’s selection of Ford’s legal team as the best corporate law department of 2006.

Mr. Thomas was one of the founding members of the Product Liability Advisory Council, and served as its second Chairperson. In addition, since 1985 he has served as a member of the council’s Case Selection Committee.