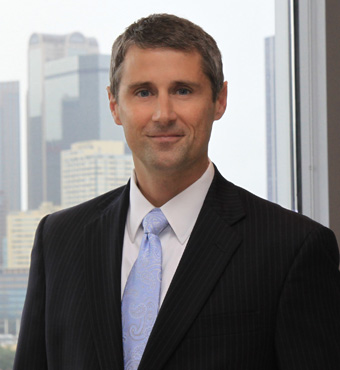 Profile
Thad Behrens specializes in navigating clients through a major business crisis. When the stakes are high, the pressure is great and the public spotlight shines bright, clients turn to Thad to calm the waters and chart the path to the best possible outcome. Clients describe him as "trusted," "very client-friendly, very smart and very strategic in his thinking," an "excellent writer, thoughtful and cost efficient," who "works well with other law firms" and "always has in mind the overarching goal and our broader interests, as opposed to just trying to win litigation."

With more than 20 years of experience, Thad is regarded by his peers as one of the nation's leading defense lawyers for securities litigation and class actions. Recognized by Chambers USA for his work in securities litigation, Thad frequently represents companies, boards of directors, executives or underwriters in securities class actions, shareholder derivative cases, M&A litigation, tender offer litigation, proxy contest lawsuits and internal investigations. Thad also is deeply experienced in defending other types of class actions, including those involving consumer protection, environmental issues, healthcare, and telecommunications.

During his career, Thad has scored major victories for some of the most recognizable companies in the United States. For example, Thad recently obtained dismissals of two class actions for Tenet Healthcare, one a securities case and the other a medical care case. Thad also led the firm's successful defense of the National Football League in a consumer class action brought by ticketholders to Super Bowl XLV - first obtaining a denial of class certification and then winning the subsequent federal jury trial against the remaining individual plaintiffs. Before that, he led BP Products North America, Inc. to victory by defeating class certification and securing a voluntary dismissal in a $10 billion environmental class action brought by property owners who claimed to have been harmed by alleged air emissions from one of the company's oil refineries.

Outside of the office, Thad is a recognized leader in the community. He is a former president of the Dallas Federal Bar Association, an alumnus of the Dallas Regional Chamber's famed Leadership Dallas program and a former barrister with the esteemed Patrick E. Higginbotham Inn of Court. He has been recognized by The Best Lawyers in America, Woodward/White, Inc., for Litigation - Securities, 2019, Chambers USA for Securities Litigation, 2018-2019, Texas Super Lawyers, Thomson Reuters, 2013-2018 and D Magazine, D Magazine Partners, as a "Best Lawyer in Dallas" for Class Actions, 2016-2018 and Securities Litigation and Enforcement, 2019. Additionally, Thad was named Litigator of the Week (October 2018) by Texas Lawyer in recognition of his successful representation of client AT&T in a federal class action suit.

Dismissal of Securities Class Action Against On-Line Dating Company. Won dismissal, with prejudice, of all claims for Match Group Inc. and its directors in a federal securities class action arising from initial public offering regarding alleged representations related to the strength of the non-dating segments of the company's business.

Dismissal of Federal Shareholder Derivative Suit. Defended national dairy processor in shareholder derivative suit alleging that the board of directors breached fiduciary duties in connection with purported antitrust violations by the company. Obtained dismissal of suit on grounds that shareholder failed to make required demand or show that demand was futile.

Denial of Class Certification and Dismissal of IPO Class Action for E-Commerce Company. Successfully opposed class certification and obtained dismissal of "strict liability" claims under Section 11 of the Securities Act brought against a technology company client. Won affirmance of dismissal on appeal.

Limited Liability Company Fiduciary Litigation Victory. Prosecuted and defended related fiduciary duty lawsuits in Texas and California between business partners in limited liability company in the pharmaceutical industry. Secured ouster of chief executive officer and installation of new management, after which a favorable settlement was reached.

Defense of AT&T in Environmental Class Action. Defeated class action bid for AT&T in a suit in federal court in Houston brought by property owners alleging that AT&T telephone cable buried underneath their properties - pursuant to easements that had been granted to AT&T in the 1950s - were contaminating their properties.

Dismissal of Class Action Against Healthcare Company. Obtained voluntary dismissal of putative class action for Tenet Healthcare arising from alleged negligence at one of the companyâ€™s hospitals.

Defense of White-Collar Criminal Jury Trial. Defended lawyer against federal criminal charges that he participated in a multi-million dollar bribe and kickback scheme. After the six-week trial, the jury was unable to reach a unanimous verdict and a mistrial was declared.
Blogs
Articles