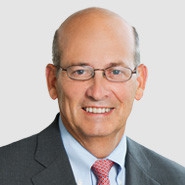 William Cavanaugh is a senior litigation Partner and served as Co-Chair of the Firm from 2007 to 2017. His areas of concentration include antitrust, intellectual property and commercial litigation.

A skilled trial attorney with extensive experience in both state and federal courts as well as in arbitrations, Mr. Cavanaugh has served as national and trial counsel in several large multiparty antitrust, fraud and consumer protection litigations in federal and state courts across the United States brought by private plaintiffs and State Attorneys General. His clients include major pharmaceutical, medical device and financial services companies. Mr. Cavanaugh also served as Deputy Assistant Attorney General of the United States for Civil Enforcement in the Antitrust Division of the Department of Justice in the beginning of the Obama Administration.

Mr. Cavanaugh is an elected Fellow of the American College of Trial Lawyers. He was recognized as a “National Practice Area Star” and a “Litigation Star” for New York in the areas of Antitrust, General Commercial, and Intellectual Property by Euromoney Institutional Investor PLC's  Benchmark Litigation, and was named the Best Lawyers® 2015 Litigation - Antitrust “Lawyer of the Year” in New York City. He is also recognized in Chambers USA.

With respect to his antitrust work, clients quoted in Benchmark have called Mr. Cavanaugh “one of the best antitrust lawyers to be found anywhere.” One stated that, “Bill has an amazing depth of experience and knowledge in antitrust. From a counselling perspective, he is able to give quick guidance and recommendations, which many attorneys are hesitant to do.” Chambers USA noted that his, “antitrust practice covers a broad spectrum of industries, including pharmaceuticals and financial services. Sources are quick to highlight his ‘big trial record’ and agency experience as particular strengths.”

Chambers USA, also recognized Mr. Cavanaugh for his patent litigation skills. Sources “describe him as ‘very accomplished’ and ‘a strong first chair’” in his representation of “marquee clients in business-critical patent cases.” The guide states that, “[t]he ‘formidable’ William Cavanaugh, observers comment, is ‘an excellent trial lawyer and strategist, quick on his feet and excellent at conveying points clearly and persuasively in the courtroom.’ He represents a fine choice of counsel for cases in the technology and life sciences sectors.”


HONORS: Recognized in Who’s Who Legal: Litigation 2017; Recognized in Chambers USA in the area of Intellectual Property: Patent; Named the Best Lawyers® 2015 Litigation - Antitrust “Lawyer of the Year” in New York City; Listed as a "Litigation Star" for New York in Euromoney Institutional Investor PLC’s Benchmark: America's Leading Litigation Firms and Attorneys; Named in Super Lawyers in the area of Antitrust and Commercial Litigation; Named to the "Irish Legal 100"

Antitrust Update Blog is a source of insights, information and analysis on criminal and civil antitrust and competition-related issues. Patterson Belknapâ€™s antitrust lawyers represent clients in antitrust litigation and counseling matters, including those related to pricing, marketing,...