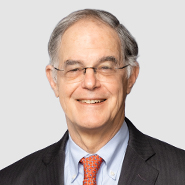 Gregory Diskant is a senior litigator at Patterson Belknap, where he served as chair from 1997-2007. As part of his active trial practice, Mr. Diskant regularly tries cases in federal and state courts and before arbitration panels, focusing on complex commercial and intellectual property litigation. He has secured billions of dollars in judgments and settlements for his clients, with multiple verdicts greater than $100 million. In jury trials around the country, Mr. Diskant has successfully represented both plaintiffs and defendants. Two of his jury victories for plaintiffs were cited as major plaintiff's verdicts of the year; two of his jury wins for defendants were cited as major defendant's verdicts of the year.  Most recently, in February 2020, he won a dispute with U.S. Customs over the imposition of up to $600 million in duties and penalties for the importation of a life-saving pharmaceutical.

Prior to joining Patterson Belknap Mr. Diskant served as Assistant United States Attorney and as Chief Appellate Attorney for the Southern District of New York. He also served as a Law Clerk to the Hon. Thurgood Marshall, Supreme Court of the United States and the Hon. J. Skelly Wright, U.S. Court of Appeals for the District of Columbia Circuit.

Licensing/Contract Disputes
Handled a variety of contract and licensing disputes, including successfully pursuing through both preliminary injunction and two prolonged trials a major pharmaceutical company's rights to a multi-million dollar pharmaceutical, winning damage awards of $164 million and $152 million; as defendant, defeated effort to terminate multi-billion dollar licensing contract. In April 2011, he obtained a settlement after trial valued at over $3 billion resolving distribution rights to a blockbuster arthritis drug. In June 2012, he obtained a defendant's award in arbitration rejecting in its entirety plaintiff’s contract claim for $130 million and an award of attorney’s fees.

Patent
Tried numerous complex patent cases, focusing on medical devices and pharmaceuticals. As plaintiff, won jury verdicts of $271 million and $324 million in cases involving coronary stents (both cited by The National Law Journal as among the major plaintiff's verdicts of the year) and arbitration award of $425 million. The series of stent cases resulted in total recoveries of $3.7 billion. As defendant, won jury verdicts defeating claims on contact lenses, stents and endoscopic devices (the last cited by The National Law Journal as one of the major defense verdicts of the year). In April 2013, obtained the complete reversal and dismissal of a $600 million judgment in a patent case involving a medical device, setting aside one of the largest jury verdicts of 2011. In August 2017, secured a jury verdict of noninfringement in favor of a contact lens manufacturer, defeating a $450 million claim.

Successfully defended the publisher of a major national newspaper in a three month jury trial labeled by the ABA Journal one of the "Major Defense Verdicts" of the year; handled multiple libel and slander cases for major media companies.