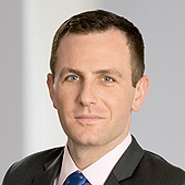 Jordan Engelhardt is Counsel in the Firm's Litigation department, where he represents clients in intellectual property litigation and complex commercial disputes. He has represented pharmaceutical and medical device companies in patent litigation on a wide range of subject matters, and has successfully defended patents protecting blockbuster medical therapies against generic challenges. Mr. Engelhardt’s commercial litigation practice also focuses on disputes relating to structured finance, securities, and corporate governance. He shares the Firm’s commitment to pro bono, with a particular interest in children’s rights. Mr. Engelhardt contributes to the Firm’s Biologics Blog and NY Commercial Division Blog.

Securities Litigation
Obtained dismissal upheld on appeal of a putative shareholder class action alleging violations of federal securities laws against an officer of a public company.

Corporate Governance
Represented a closely held corporation in defense of a challenge to corporate activities involving a real estate ground lease, including successfully opposing a TRO, resulting in withdrawal of the action.

Represented shareholders of a publicly traded REIT demanding that the board of directors terminate contracts with a mortgage servicer and an asset manager in fulfillment of fiduciary duties.

Investigations
Conducted an FCPA investigation on behalf of a company with global operations regarding potential payments to foreign officials and conflicts of interest with contractors.

Pro Bono
Representing an asylum applicant who was unlawfully detained and mistreated by police in his home country due to his sexual orientation.

Obtained permanent resident status as a Special Immigrant Juvenile for an unaccompanied minor who had suffered abuse and neglect in her home country.

Secured a class action settlement for a class of children in foster care providing substantial reforms to ensure that children do not languish in psychiatric hospitals longer than medically necessary and recovered individual monetary awards for named class representatives.

Represented a defendant-appellant in an appeal to the New York Supreme Court Appellate Term of a misdemeanor criminal conviction.

The Food and Drug Administration (“FDA”) issued its Development and Licensure of Vaccines to Prevent COVID-19: Guidance for Industry on June 30, 2020.  This nonbinding guidance is intended to remain in effect for the duration of the COVID-19 public health emergency declared by the Secretary of Health and Human Services. The guidance advises vaccine development and licensure following the standard trial progression but on an accelerated timeline...

As the United States and countries all over the world continue to grapple with the Covid-19 pandemic, the race is on for Covid-19 treatments and vaccines.  There is currently no FDA-approved therapy or vaccine for Covid-19.  Given the profound urgency, life sciences companies and other researchers are prioritizing research and development of potential therapies and vaccines...