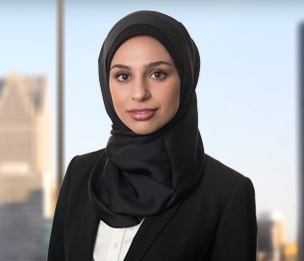 Sarah S. Hazimi is an associate in Dykema's Bloomfield Hills office. Ms. Hazimi focuses her practice on data privacy and security as well as litigation matters.

Prior to joining Dykema, Ms. Hazimi served as an intern for the former Chief Judge Gerald Rosen in the Eastern District of Michigan's federal court. Ms. Hazimi also interned at the United States Attorney's Office in Detroit, where she assisted in the drug task force. Ms. Hazimi previously worked as a research clerk at a Michigan-based law firm.

While in law school, Ms. Hazimi participated in both law review and moot court, and served on the executive board of the Middle Eastern Law Student Association.