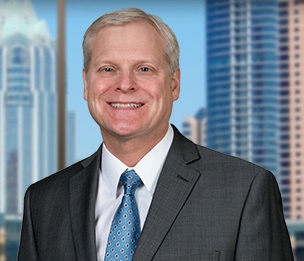 Michael Adams is a member of the Intellectual Property Practice Group in Dykema's Austin, Texas office. For almost 30 years, Mike has focused his practice on patent, trademark, copyright and trade secret law, with an emphasis on the procurement, due diligence, licensing and litigation of intellectual property rights. Making use of his electrical engineering degree, his practiceÂ has concentrated on intellectual property issues arising in the following industries: computer, semiconductor, electronics, software, e-commerce and internet. Mike has participated in patent infringement trials before the U.S. District Courts for the Eastern (Marshall) and Western (Austin) Districts of Texas and the Eastern District of Virginia, and appeals to the U.S. Court of Appeals for the Federal Circuit. He has been recognized inÂ The Best Lawyers andÂ Texas Super Lawyers for the past several years.

Mr. Adams served asÂ lead counsel for a jury trial in Marshall, Texas, representing the defendants who had numerous claims asserted against them, including for infringement of a patent involving software used on the internet for comparing configured vehicles. Prior to trial, plaintiffs agreed to withdraw three other patents from the case and to dismiss a fourth patent. Defendants asserted counterclaims for trade secret misappropriation and breach of contract. The jury found in favor of the defendants on all of plaintiffsâ€™ remaining asserted claims. Additionally, the jury found that the remaining patent-in-suit was invalid, and found in favor of defendants on its breach of contract andÂ misappropriation of trade secret counterclaims, awarding damages to defendants in the amount of $2,000,001. In 2014, the Court of Appeals for the Federal Circuit affirmed the final judgment. See Versata Software, Inc. v. Internet Brands, Inc., 902 F. Supp. 2d 841 (E.D. Tex 2012); Decision reached on appeal, 2014 U.S. App. LEXIS 1062 (Fed. Cir., Jan. 17, 2014)