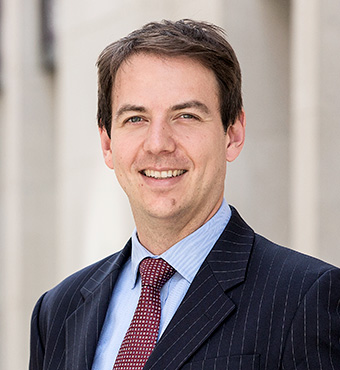 Markus' practice focuses on energy, projects, construction and infrastructure disputes. His clients include international EPC contractors and energy companies, based in England, the United States, Asia and the Middle East. He also acts in complex commercial disputes in other industries. In particular, Markus advises clients in the hotels and hospitality industry, including as regards disputes under management and franchising agreements. Markus also acts in contentious IT matters, shareholder disputes, corporate warranty claims, patent licensing disputes, aviation, rail, pharmaceuticals, medical devices and contentious matters in the insurance industry.

Markus is a recommended lawyer in the international arbitration section of the 2020 UK edition of The Legal 500, Legalease, the international directory of law firms. Legal 500 reports that “Markus Esly is intelligent, industrious and has his head on his shoulders”. Previously Legal 500 have reported that Markus is “very thorough and organised and a good team player.”

Thailand/Malaysia - Dispute concerning a joint venture for natural gas facilities (ICC). Advising on a dispute arising out of an international joint venture project for the construction of a gas separation plant and pipelines in Thailand/Malaysia, including issues under a long-term gas supply contract.

Maldives - ICC arbitration concerning the termination of a luxury resort hotel subject to a long-term management agreement, for one of the largest international hotel operators.

Ukraine - Shareholder dispute (LCIA). Acting in an LCIA arbitration concerning a claim arising under a shareholder agreement and related investment contracts, concerning one of the largest consumer banks in the Ukraine.

North Sea - Gas Leak on Operating Platform. Advising on the contractual implications of a gas leak on a North Sea "production utility quarters" platform (Elgin/Franklin) that required a shutdown of a number of fields and gas transportation systems, including issues of force majeure and take-or-pay obligations.

United Kingdom - Standard Chartered Bank v. Pakistan National Shipping Corporation [2002] UKHL 43. Successfully concluded long-running litigation arising out of a fraud under a letter of credit both before the Court of Appeal and the House of Lords, acting for the claimant bank.

United Kingdom - Defects in floating production storage and offloading vessel (Commercial Court). Litigation before the Commercial Court concerning a contract for the supply of an FPSO.

Russian Federation - High Court (Commercial Court). Advising a Russian bank regarding exposure to claims in connection with a potential purchase of US$2 billion of shares, title to which was contested in high-profile litigation between oligarchs in the English courts.

Ukraine - Breach of warranty under sale and purchase agreement (LCIA). Acting in an LCIA arbitration concerning a claim for breach of warranties in an acquisition of a Ukrainian bank by European investors.

Kazakhstan - Dispute under Concession Agreement. Advising a Scandinavian oil company in a dispute concerning a concession agreement for the exploration of hydrocarbon reserves in Kazakhstan, including bribery allegations and the effect of unilateral termination and purported transfers of interests to third parties.

Kazakhstan - Retrospective Taxation of Subsoil Use Operations. Advising in a claim for breach of warranty based on demands by the Kazakh authorities for retrospective tax, following the sale and purchase of an interest in a subsoil use contract.

Algeria - Construction of trans-Algerian motorway (ICC). Advising an international contractor on claims arising out of a construction contract for what was then the world's largest road construction project.

Kuwait - Oil refinery dispute. Advising a Japanese EPC contractor on litigation before the Kuwaiti courts arising out of the design and construction of an oil refinery complex commissioned by Kuwaiti state-owned interests, in conjunction with local counsel.

Singapore - Olefins Project. Advising a main contractor on subcontract terms in a project for the construction of an olefins plant in Singapore.

World Trade Organisation - Advising an international manufacturer of consumer goods on a number of legislative measures as regards infringement of GATT, TBT, SPS and TRIPS.

Romania - Expropriation. Advising an Austrian steel producer on investment treaty claims arising out of its operations in Romania.

Turkey - Bilateral Investment Treaty claims after privatisation. Advising an international manufacturing business on claims following the acquisition of a previously state-owned producer of consumer goods and subsequent changes in the local laws that were to the detriment of investors.
Blogs
Articles