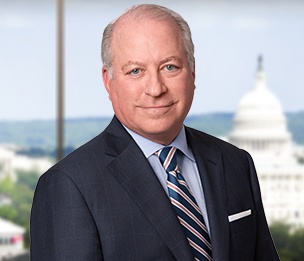 Lew Loss is a Member in Dykema's Washington, D.C. office, and serves as Co-Director of the Firm's Insurance Industry Practice Group. Lew has been actively engaged in the private practice of law for over thirty-five years. He serves as advisor and advocate for a diverse and growing group of valued clients. Chambers USA reports that "clients agree that Lew displays judgment and strategy of the very highest caliber."

Lew devotes a very substantial portion of his practice to the representation of liability insurers. He frequently is called upon by insurers to provide advice and counseling with respect to complex coverage issues involving a broad array of insurance products.

Lew has represented insurers in disputes all across the country and has successfully litigated cases in both federal and state court in numerous jurisdictions on behalf of insurer clients. He also is regularly called upon to serve as monitoring counsel, assisting his clients to navigate difficult claims to desirable outcomes. Lew has very extensive experience in the use of ADR processes to resolve disputes. His writings on issues of interest to liability insurers have been published in national periodicals, and he has spoken on a variety of issues at professional symposia as well.

Lew leads the firm in its role as general counsel for the Commission on Presidential Debates. He has been intimately involved in many aspects of the general election televised debates in every election cycle from 1988 (Bush-Dukakis) through 2016 (Clinton-Trump). Lew provides the CPD ongoing corporate advice, as well as more specialized advice pertaining to the special set of legal issues bearing on the sponsorship of presidential debates. In his role as counsel for the CPD, he has appeared many times before the Federal Election Commission and numerous courts when the CPD has faced legal challenges. Lew also has participated in multiple international delegations and symposia to counsel emerging and fragile democracies on the sponsorship of televised candidate debates.

For many years, Lew has been named one of "America's Leading Lawyers for Business" by Chambers USA and a “Washington, D.C. Super Lawyer.” He also is included on a regular basis in the International Who's Who of Business Lawyers.

All Stop: Ruling on the Applicability of Exclusion to BIPA Claims Delayed
Dykema, March 2019


The fallout from the Illinois Supreme Court’s January 25, 2019, opinion in Rosenbach v. Six Flags Entertainment Corp., 19 IL 12316, continues.Rosenbach settled the dispute of who qualifies as an “aggrieved person” under the Illinois Biometric Information Privacy Act (“BIPA”), and in doing so opened the floodgates for this litigation to proliferate...