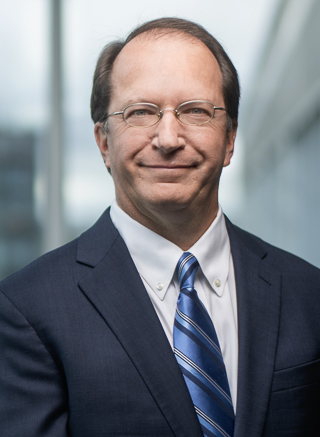 George Cate is a trial lawyer who focuses his practice on business litigation, government enforcement proceedings, internal investigations, and related counseling. His experience includes advising companies and business executives on the management of complex legal matters that involve significant public scrutiny and exposure on multiple fronts, including civil, criminal and reputational.

George has represented public, private and federally owned companies, as well as individuals, in connection with such matters. He has worked with companies and executives in several industries, including healthcare, hospitality, petroleum, construction, public power, book and digital content distribution, banking, tire, and automobile and aviation manufacturing.

George’s business litigation experience includes the representation of U.S. and international clients in federal and state court. He has handled matters arising from a full range of complex commercial disputes, including misappropriation of trade secrets and other intellectual property disputes; executive liability for breach of fiduciary duty and violation of non-competition/non-solicitation obligations; interference with business relationships and other business torts; fraud claims (including bank fraud, embezzlement and consumer fraud) and disputes under the False Claims Act; insurance litigation; lender liability, disputes involving financial institutions serving as trustees, and other banking litigation; federal tax litigation; and a variety of other contract and commercial disputes.

During his career, George has also represented businesses in the defense of high-exposure personal injury litigation, including mass tort cases and the defense of automotive and aviation manufacturers in product liability litigation.

During his more than 30 years of practice, George has tried a significant number of jury and bench trials, and he has obtained the dismissal or other favorable pretrial disposition of many other cases. He has also successfully prosecuted and defended a broad range of injunction proceedings. In addition, George has represented clients in securing the favorable settlement of complex litigation matters, including the successful negotiation of settlements in nationwide class actions, government enforcement proceedings, and international business disputes.

In addition, George regularly advises hospitals and surgery centers with respect to litigation and the resolution of business disputes and assists them with litigation due diligence and risk assessment in connection with mergers and acquisitions and other business transactions. He also advises hospitals and their medical staff in connection with peer review proceedings, conducts fair hearings on their behalf, and defends the peer review privilege in response to civil and administrative subpoenas.

George has represented companies and individuals in government enforcement actions and investigations on both the federal and state levels.

George has defended companies and individuals in civil, administrative, and white-collar criminal investigations brought by federal and state authorities; negotiated agreements to avoid criminal charges and resolve civil claims brought by the government; defended clients in a variety of enforcement proceedings in federal and state court; and represented clients in administrative actions before government agencies.

In addition, George has advised clients on the response to private-party claims arising out of government enforcement proceedings, including the negotiation of a nationwide class-action settlement agreement that arose out of a highly publicized federal criminal investigation involving one of the largest privately held companies in the U.S.