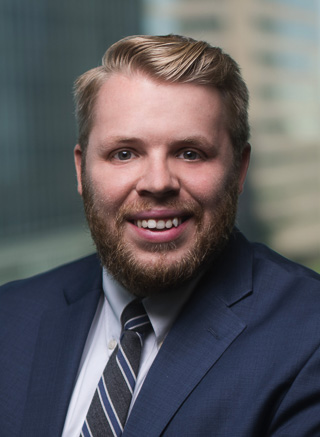 Richard Swor is an associate in the Litigation and Intellectual Property practice groups. His practice focuses on complex business and commercial litigation, assisting clients at the trial court, appellate court, and administrative court levels. Richard has been involved in a wide variety of dispute subject matter areas, including pharmaceutical defense, construction, trademark, domain names, and local election laws.

His practice includes representing clients in trademark disputes, including at the Trademark Trial and Appeal Board (TTAB) in both inter partes and ex parte proceedings. Richard has assisted clients with brand enforcement by obtaining swift and efficient victories in over a dozen matters. His litigation practice is bolstered by his work in advising clients regarding trademark clearance and trademark prosecution before the United States Patent and Trademark Office. Richard graduated (summa cum laude) from Belmont University College of Law, where he served as the executive events editor of the Belmont Law Review. His note, Long Term Solutions to the Short-Term Problem: An Analysis of the Current Legal Issues Related to Airbnb and Similar Short-Term Rental Companies with a Proposed Model Ordinance, was published in Vol. 6, Issue 1 of that journal. He was also active in Belmont’s Moot Court Team, where he was elected the Moot Court captain and served as the chief brief writer for four national competition teams. His team won first place at the Emory Civil Rights and Liberties Moot Court competition in 2018 and won Best Brief at the same competition in 2017. At the American Bar Association National Appellate Advocacy Competition, his team was a San Francisco Regional Champion in 2018 and a Brooklyn Regional Finalist in 2019. After graduating from law school, he served as an assistant coach for Belmont’s Moot Court Team.

While in law school, Richard interned as a summer clerk for the Hon. Judge Joseph A. Woodruff in the State of Tennessee’s 21st Judicial District.

Prior to law school, Richard worked as an audio engineer at post-production facilities in Nashville and Los Angeles.