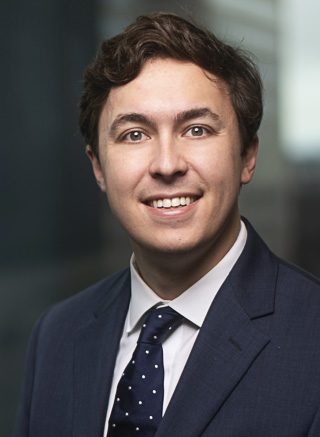 Riley McDaniel is an associate in the firm’s Litigation Practice Group. Riley represents clients in both state and federal courts in a broad range of commercial, pharmaceutical, product liability, and healthcare litigation matters. He has experience at all stages of litigation — from inception through appeal, including crafting litigation strategy, handling written and document discovery, drafting dispositive motions, and at trial.

In particular, Riley regularly assists clients with legal strategy, motion practice, and appeals. In this role, he has assisted as an “appellate lawyer at trial,” with responsibility for briefing dispositive motions, Daubert motions, motions in limine, and post-judgment motions, and for handling various evidentiary and legal issues arising over the course of trial.

Riley also maintains an active pro bono practice, through which he currently represents an individual in an immigration appeal before the 11th Circuit.

As a member of the Firm’s Cannabis Industry team, Riley also represents clients in a wide range of cannabis issues. For example, he has counseled clients on how to effectively and efficiently comply with the Bank Secrecy Act (BSA) and Money Laundering Control Act (MLCA).


This is the first article in a three-part series focused on the intersection of the 2020 presidential election and cannabis policy in the United States. Each article will focus on the specific presidential candidates of the two major parties and the eventual winner. Check back in two weeks for the next entry in this series. The 2020 U.S. presidential election is underway, with many voters already casting their ballots under unprecedented circumstances...