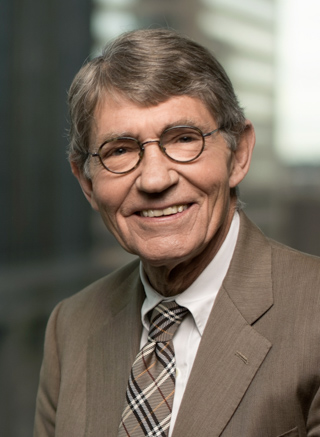 First things first, I am married to Jeanne Rogers, who was born in Montgomery, Alabama, and who attended a school for designers in New York, Parsons. I amthe proud and happy father of three children who (as of November 2016) are 40 (a son practicing law at a public interest environmental firm in Atlanta), 35 (adaughter who works as an investment advisor in Birmingham), and 31 (a daughter who graduated fromgraduate school in architecture at Georgia Tech and is now with an architectural firm in Birmingham). They, along with three grandchildren and a fourth on the way are my hobby and my true joy in life, next to myspouse. Aside from them, I enjoy reading, gardening (in small doses), and helping to resolve issues (on non-billable time) which affect the constructionindustry, nationally, regionally, and locally.

I also have the signal honor of a "little" brother (he's 67 years old) who was posted to Bayji, Iraq, in 2004-2005. When he returned from Iraq, he was then(September 2005) sent to assist with Hurricane Katrina relief.

Professionally, I suppose I have received some of my very best training, for what I currently do, when I was a carpenter's helper, as a boy in high school,assisting with the small jobs which a small-town contractor has (small commercial projects, repair projects at larger industrial facilities, and homes).Perhaps the best thing that could be said about me on my gravestone will be that "he was a carpenter." I learned there the pleasure of hard work, thesatisfaction of a job well done, and the difficulty (for my small-contractor employer) to allow the "eagle to fly" on payday.

Since then, I left the deep south (Demopolis, Alabama, in L.A. [Lower Alabama], about 3 hours north of the "Redneck Riviera") and journeyed to Yale, wheresome of the most interesting and brightest young people in the world helped me get the straw out of my hair and the johnson grass off my shoes. After Yale,I had the challenge of teaching school in an inner-city high school in Philadelphia, Pennsylvania (Gratz High School), and I pursued graduate courses inthe philosophy of education at Temple University in Philadelphia. Continuing my effort to absorb sophistication, learning, and charm, I attended HarvardLaw School, graduating in 1974, with good grades and the regard of my classmates, who elected me Class Secretary.

Having absorbed what I could absorb, still being a boy from the country, though now a country lawyer, I returned to Alabama, settling on a practice inBirmingham, after a clerkship with one of the fine Federal Judges here, the late Seybourne H. Lynne.

I took employment with Bradley in 1975, and I have been here ever since.

As you can see, if you visit the various sub-sites that surround this biography on the Bradley website, I have principally engaged in complex construction orprocurement matters since that time. I started with the defense of Westinghouse in the uranium litigation arising from reactors built by Alabama PowerCompany and Tennessee Valley Authority. During that work, this firm developed strategies and techniques for managing complex litigation, which we haverefined ever since, including categorizing and computerizing various documents or ideas involved in complex litigation. In the late 70's, we designedprograms for use on clients' in-house computers, and since that time, we have assisted vendors of litigation support services in designing products thatfit the needs of our particular claim or litigation situation and strategy. Of course, these days, we are focused on how electronically stored informationis to be handled both as a course of business and as a matter of discovery in litigation.

I don't want to be famous; I just want to be good at what I do. My philosophy as a lawyer is to do the job well, as economically as is feasible under the circumstances, and with honor and pride. I am still a carpenter,in philosophy, if not in profession. I believe clients who are business people are the best people to solve the problems about which I am consulted. Hence,I do not push litigation, whether it is “gentle,” "scorched earth," “a rifle shot,” or "ambush," or some other variety, unless that is the only availablestrategy. Even when that is the case, I always look for "plateaus" where the clients can talk, as business people, either directly or through lawyers, toreach a satisfactory business resolution of the conflict.

I have been involved in a great deal of complex litigation all over the country (and, when it suits me to travel that far, overseas), notwithstanding myphilosophy. In addition, I have had the pleasure of assisting in negotiations of large construction projects at the front-end, representing owners,lenders, designers, and contractors (not all at the same time, of course). I have been involved with all of the delivery systems, including the "new"design-build system. I routinely work on projects involving collaborative design and delivery models.

I have experience based upon thousands of arbitration demands and have tried scores of arbitrations to a result, in virtually every one of the contiguousstates. I frequently serve as an arbitrator, less frequently as a mediator. I have tried jury trials to a result in Alabama (of course), Arkansas, NorthCarolina, Texas, Illinois, and Florida. I have mediated (as a party representative) dozens of disputes before mediators in Hawaii, California,Massachusetts, Texas, District of Columbia, Virginia, Florida, Georgia, Pennsylvania, Arkansas, Missouri, New York, Louisiana, Maryland, West Virginia,Mississippi, Tennessee, Colorado, North Carolina, South Carolina, Puerto Rico, and Alabama, as well as Ontario, London, and Panama. And I still manage to get some matters settled in the way it was done beforethe “invention” of mediators: by calling the other side and talking about settlement.

Many, but not all, of my “portfolio” of matters is on the tab on the Bradley webpage for “Experience.”

Historically, in the late 70's, a partner, who also was a construction and procurement lawyer, and I realized that we sat in a "bread basket" ofcontractors and of public procurement. Some of the leading contractors (according to the ENR annual survey) were within an hour of our law firm's door, andthe Redstone Arsenal in Huntsville housed any number of procurement opportunities for clients and potential clients. Based upon that, we embarked upon aprogram to enhance our ability to deliver construction legal services to the construction and procurement market and the Construction and ProcurementPractice Group was born -- informal at that time -- in 1978. Since then, the practice group has added many very capable lawyers so the Construction andProcurement Practice Group has exceptional bench strength and has even birthed its close relative, the Government Procurement Practice Group. We havenegotiated billions of dollars of contracts, have prepared and negotiated (often through mediation) resolution of billions of dollars of claims, andwe have, when all else failed, litigated to a litigated resolution several other hundreds of millions of dollars in claims. We have done this from thepoint of view of both claimants ("plaintiffs," where appropriate) and respondents ("defendants," where appropriate). We have done it throughout the world,having recently reached resolution of a matter involving an ICC arbitration of a construction dispute which arose in Panama.

I have been honored with recognition, and I am humbled by it. I was named, in August 2004, in the 100 persons of the "Who's Who in Construction" by theBirmingham Business Journal, I am listed in other books of "lists", including The Best Lawyers in America and Chambers USA, which recently noted I am a“construction guru” with a practice that is “national in scope.” In the early 1990s, I was elected to the American College of Construction Lawyers. In2011, and again in 2014-2016, BTI Consulting notified me that I have been selected for recognition for client service. This is more than a “paidadvertisement,” because BTI names a group of attorneys who are recognized by their clients for superior client service. The only path to becoming a BTIClient Service All-Star is for corporate counsel and corporate-level executives to single out a lawyer in an unprompted manner as part of independentresearch conducted by BTI Consulting. It is gratifying to have clients who are pleased with the services I render (with the help of so many of our firm’sfine lawyers and staff). Likewise, I was recently named in a presentation in London as one of four lawyers in the U.S. for outstanding client service.

The practice is exciting, stimulating, challenging, and rewarding (always as to satisfaction, sometimes as to remuneration). I am honored and privileged tobe a part of such an important piece of the American and global economies, and it is always satisfying to point out to my family and friends a structure orbuilding that I was lucky enough to be involved with.